We cannot match Ireland’s results, as such high dynamics for the industry are extremely rare. But more and more countries are in front of us on a union scale. Poland is still sixth place well, given the collapse of the industry of our largest recipient of exports, that is Germany.

The pandemic crisis not only spared Ireland, it gave it an additional development stimulus. According to Eurostat data, industrial production there increased in February By 41.4 percent every year. For this country, similar figures are not strange, because higher dynamics were announced exactly five years ago.

Intel recently launched new production plants in Ireland, and has already invested 19 billion euros there. It even relocates its European headquarters there. In the past 10 years, € 10 billion has been invested in production by biotechnology and pharmaceutical companies, including: Pfizer, Lilly, J&J, Sanofi-Genzyme and Allergan. In the case of a pandemic, with medicines and electronic equipment selling well around the world, Ireland is registering the largest economic growth.

Poland is falling behind

Poland is far from such results. In February, our industry Production increased by 4.3 percent. every year – Eurostat reported. This was the eighth result in Europe and Sixth in the European Union. Aside from Ireland, growth dynamics overtook: Lithuania, Serbia, Bosnia and Herzegovina, Finland, Croatia and Greece. 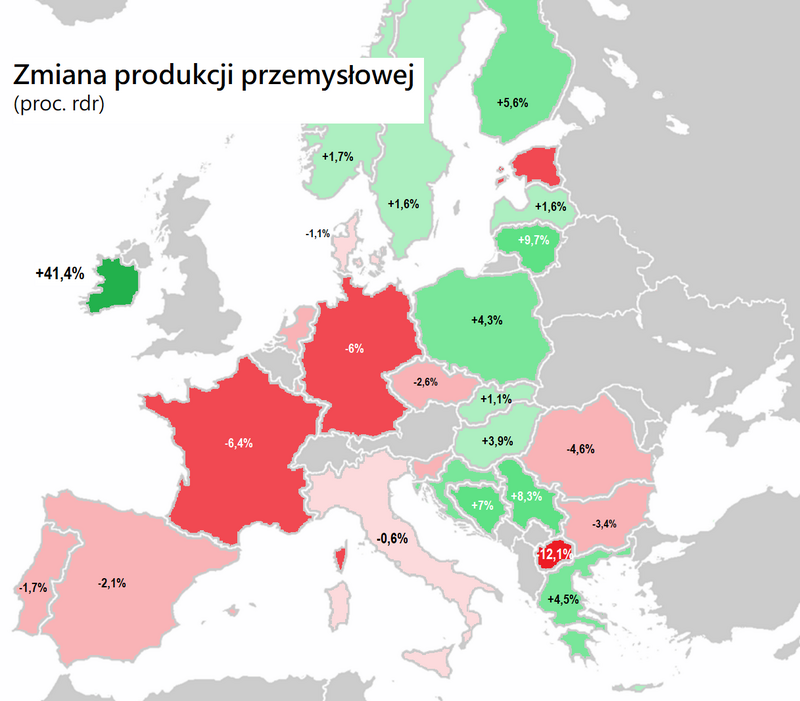 The EU industry fell 1.1% in February, so our result can be considered good. Moreover, it is related to Germany’s score. It is the largest recipient of Polish exports, and there are many factories in Poland that manufacture components for products from German factories. In February, German industry saw a 6 percent drop. X p. 6.4 percent, as the manufacturing sector in France declined.

According to them, the declines are linked, among other things, with the structure of the German economy, in which investment goods play an important role.